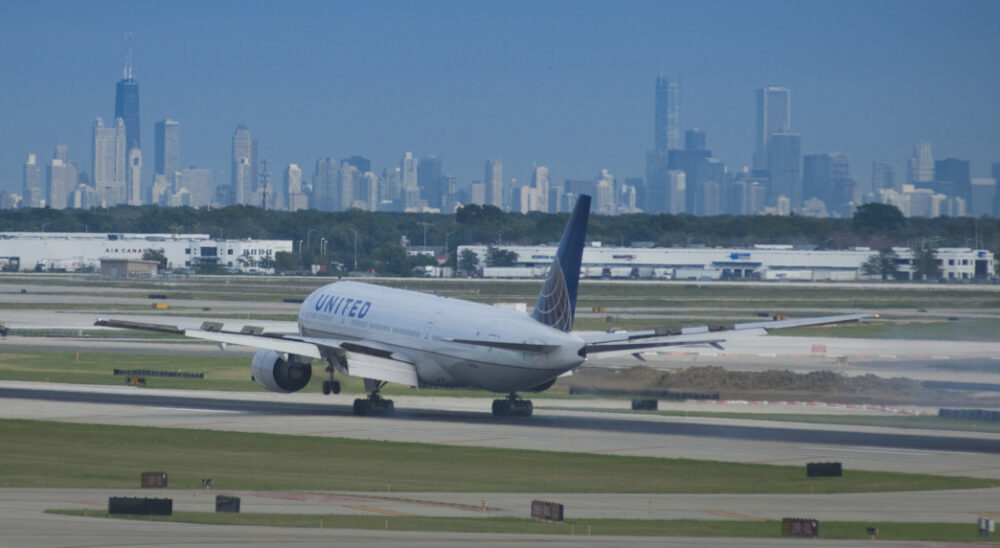 A United Airlines Airbus A320 inadvertently flew into a hailstorm outside Chicago on Monday afternoon (local time), cracking the cockpit’s windshield. The flight, bound for Washington D.C., was forced to turn back and make an emergency landing at Chicago’s O’Hare Airport.

A spot of bad weather over Lake Michigan

The flight, UA349, pushed back from O’Hare just before 14:00 on Monday. UA349 is a daily mid-afternoon service east, usually taking about 80 minutes to get over to Washington D.C. On Monday, an A320-200 (registration N462UA) operated the service.

But only minutes into the flight, and tracking due east from O’Hare, the Airbus hit hail over Lake Michigan.  One passenger, Alex Lang, took a photo of the cracked windshield and posted it on Twitter.

Mr Lang described the hailstorm as “pretty bad.” After running into the hail, the United Airlines aircraft tracked north over Lake Michigan before doing a 180-degree turn, tracking south, and heading back towards Chicago. The plane landed safely at 14:58, having spent just over one hour in the air.

Hail can be hard to spot on radar. While any pilot will choose to avoid it, that’s not always possible. While big planes like this Airbus are built to withstand hail, it can cause significant damage to aircraft, not to mention it presenting as a frightening experience for everyone onboard.

The cracked windshield may have looked worse than it really was

Cracked cockpit windshields are a common occurrence when planes run into hail. Usually, it looks worse than it is. Windshields are designed so that while the outer shield may be cracked, the inner windscreen stays intact. A cracked outer windshield doesn’t necessarily make a plane unsafe to fly. What it does is reduce pilot visibility, and that in itself is a hazard. Plus, it’s not exactly a sight to encourage passenger confidence.

Passengers like Mr Lang see the visible signs of hail damage. But there is other potential damage a passenger onboard may not even be aware of after hitting hail.

Towards the front of the plane is the randome. This is a weatherproof enclosure that protects the radar antenna. Often, the randome can take a hit during a hail storm. It can look ugly if you’re outside the plane. Inside, you won’t even see the damage. However, damaging the randome doesn’t impact flight safety. Even if it were entirely taken out, the antenna would still work, albeit with an increased risk of damage to it.

Another potential threat of hail is the damage it can do to aircraft engines. Theoretically, hail getting into the engine could damage an inlet guide vane or compressor blade. But this is very unlikely to happen. Further, the cowling of the engine is designed to protect the fuselage from loose objects. Given that engine makers and aircraft manufacturers are known to test aircraft engines by throwing solidly frozen poultry into them, it would have to be a mighty big piece of hail to present as a serious threat to an aircraft engine.

But knowing all that wouldn’t stop you sweating if your plane was getting knocked about in a hailstorm above Lake Michigan. Mr Lang said the experience exceeded the worst turbulence he’d ever being through.

After landing safely, the passengers were put onto other Washington D.C. bound flights. The aircraft remains on the ground at O’Hare; however, online databases show it is slated to fly again on Tuesday evening.